100 Ideas that didn’t Change the Web

I’ve been asked a lot which ideas didn’t make the cut in my book, 100 Ideas that Changed the Web. Here they are…

The book could easily have become a list of technical breakthroughs and dot com success stories but the web is more complicated than that. It’s a result of social and cultural pressures as much as programming and commercial achievements. I wanted the book to be a balanced reflection of all of these influences. So MySpace, Yahoo! and Amazon are out and Net Art, the emoticon and The Blair Witch Project are in. 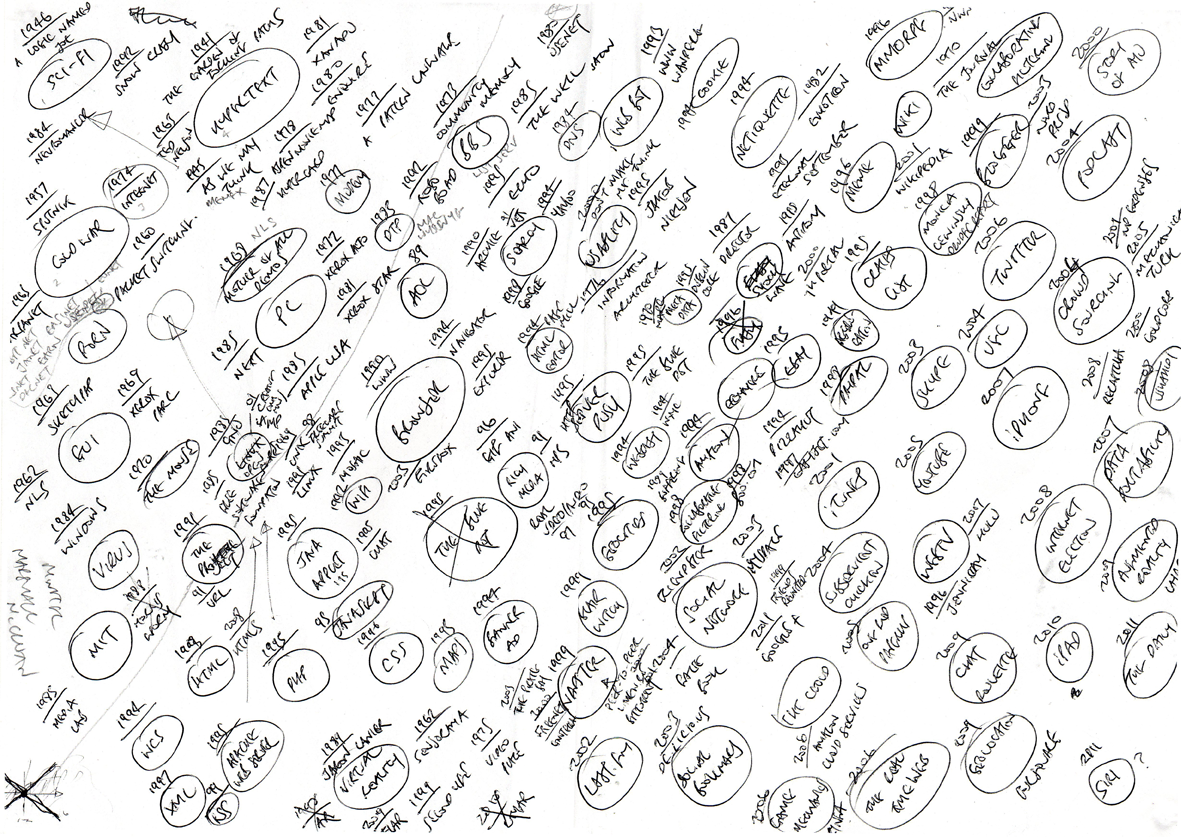 Original sketch for 100 Ideas that Changed the Web

I also gave serious consideration to whether brands could be ideas. A few made it through, like GeoCities, The Drudge Report and Youtube but most did not. Amazon for example, perhaps gets the most mentions throughout the book appearing in 15 of the other ideas but does not have its own entry. Blogger, Friendster, MySpace, Craig’s List, Yahoo!, Last.fm, Second Life, Ushahadi, Pinterest, iTunes, Bitcoin, Skype and The Daily all got dropped, although most are referenced elsewhere.

Throughout I was keen to promote the unsung heroes of the Web – the story of the engineers that built the web and the entrepreneurs that exploited it as largely been told. The story of the creative minds and generous souls that shaped it has not – for example, Paul Otlet (Mundaneum), Susan Kare (GUI), Scot Fahlman (emoticon), Danni Ashe (pornography), Hedy Lamaar (Wifi), Brian Behlendorf (Apache Web Server), Severe Tire Damage (Web Streaming), Artisan Entertainment (Blair Witch) and Ethan Marcotte (Responsive Design).

I also had a internal debate about what constituted an idea – HTML is a fundamental part of the web but it’s not an original idea. Like many of the technical ideas on the original list, I ended up merging it with others to boil it down to a core concept. HTML, SGML and XML became Markup Language. Similarly, PHP, Linux and the GNU Project were all combined into a single entry, Open Source. JavaScript morphed into AJAX.

Ideas that were dropped entirely included Shockwave, Chat Roulette, Twitch TV, facial recognition and voice recognition. Shockwave was the toughest to drop but it’s primarily a CD-ROM authoring tool and was a mezzanine technology that paved the way for Flash rather than changing the Web in its own right. Chat Roulette got cut because I’d covered the seedy side of the web with pornography, and video chat had been addressed elsewhere.  Twitch TV would probably have got a bigger mention if I was writing the book now but in 2012 it was in its infancy. I felt it was also too early to include facial and voice recognition, they haven’t changed the Web for most people quite yet.

100 Ideas that Changed the Web, available on Amazon UK and Amazon US.