After 18 months work, Digital Revolution is finally here. An exhibition of digital art, design, film, music, websites CD-ROMs and video games that I was lucky enough to contribute to.

My role was to tell the history of digital culture in 100 creative projects starting from 1970, the year before the first microprocessor emerged (Intel’s C4004). However,  it was important to acknowledge the pioneering work of the 50’s and 60’s that sowed the seeds of the Digital Revolution. William Fetter’s Boeing Man (1), Charles Csuri’s Hummingbird (2) and Kenneth Knowlton’s in Studies Perception (3) pay tribute to those who first saw the creative potential of the computer. 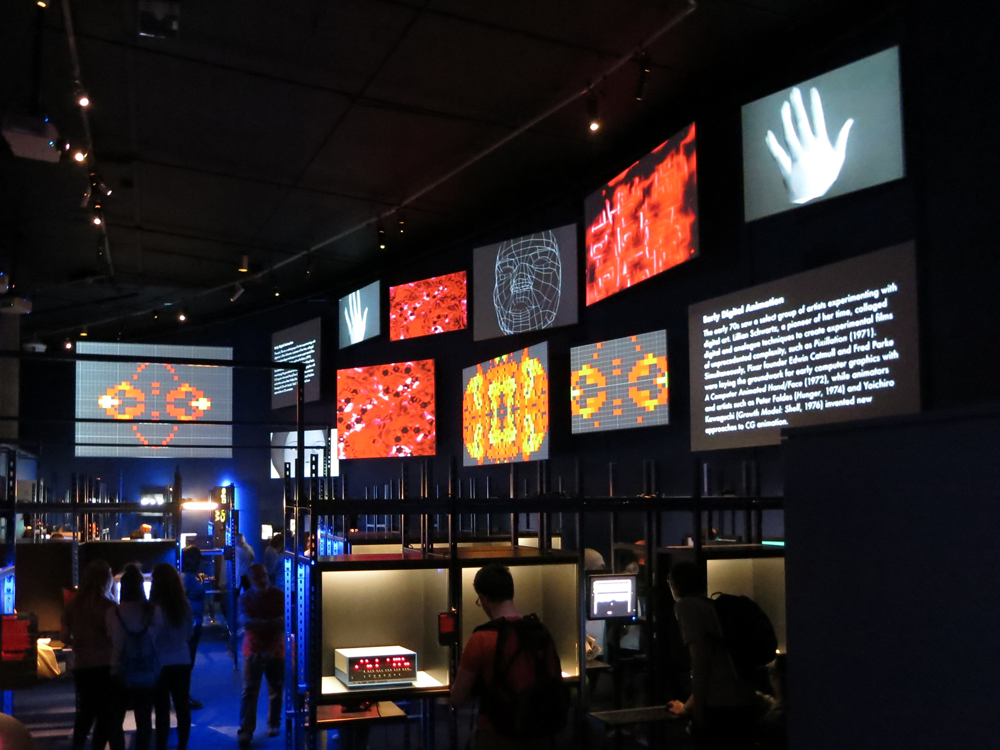 The Digital Archaeology section of Digital Revolution at The Barbican

1970’s
The first exhibit proper is John Conway’s Game of Life (4), a piece of generative art that evolves beyond the imaginations of those that determine its original configuration. The second exhibit is Ralph Baer’s Magnovox Odyssey (5), the first games console and the inspiration for Atari’s Pong (6). This is followed by other game-changing hardware, the Altair 8800 (7), the Apple II (8) – shown with Breakout (9) – and the Commodore PET (10), the machines that took the computer revolution out of the laboratory and into our homes.

CGI came of age in the 80’s. 1982’s Tron was a game-changer but Disney wouldn’t let me put it in the show (boo), so we included the show reel of Roberts Abel and Associates, High Fidelity (56), one of the companies that produced the computer-generated effects for the film. The first computer-generated, photorealistic character, John Lasseter’s stained-glass knight in Young Sherlock Holmes (57) is in but Pixar didn’t sanction Lasseter’s subsequent creations, Luxo Jnr and Toy Story. Happily, 20th Century Fox did allow me to include The Abyss (58).  The launch of MTV led to CGI sized-budgets being invested in music videos, typified by Steve Barron’s video for Money For Nothing (59) made on the Quantel Paintbox (60).

2000’s
In the 2000’s, people like Soda (85), Joshua Davis (86), Hi-ReS! (87) and Yugo Nakamura (88) continued to push back the boundaries of interaction design and brands started to take the Web seriously – represented in the show by Uniqlock (89) and Subservient Chicken (90). But most significantly, the social web emerged. Jonathan Harris and Sep Kumvar’s We Feel Fine (91) and João Wilbert’s Exquisite Clock (92) source their content from across the Web. And you can’t have a digital show without inlcuding Golan Levin, his Eye Code piece (93) is unnervingly prescient of the global surveillance programs revealed by Edward Snowden in 2013.

The Spirits Within (94) was the first photorealistic computer animated film, Gollum’s motion-captured character interacted seamlessly with other actors in The Two Towers (95) and Sky Captain of Tomorrow (96) had an entirely computer generated set. The 2000’s gave us some of the most successful games of all time, including The Sims (97), GTA3 (98) and Wii Sports (99) but it was the smart phone that changed the world.

No App symbolises this momentous shift better than Angry Birds (100), which is my last exhibit in the show.  When billions of us started catapulting wingless birds at bad piggies, digital culture had become just culture.