The idea of the Internet was born in Belgium

In 1934, six decades before the birth of the web, a Belgian bibliophile described his vision for té lé photographie, an electronic telescope which could transmit any document in the world to a television screen.

Paul Otlet loved libraries. In 1895 he met a kindred spirit, fellow Belgian and future Nobel Prize winner, Henri La Fontaine. Together they conceived The Mundaneum, a comprehensive collection of the world’s published knowledge, equal in ambition to the great Library of Alexandria. 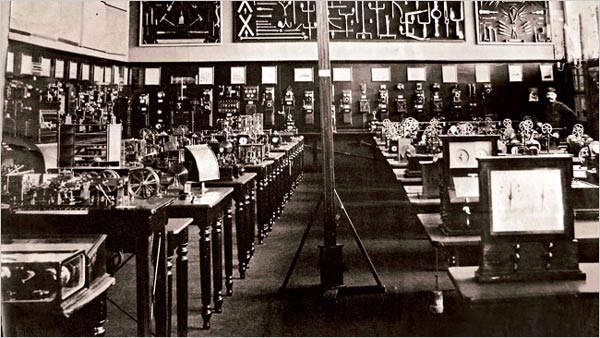 The telegraph room at The Mundaneum

By 1910 they had collected thousands of books, newspapers, photographs, journals, posters and postcards. Otlet called the collection the ré seau, a network of documents connected by links. More than blind signposts, these links described the relationships between documents, an implementation of what we now call the semantic web. As the Mundaneum grew, this degree of annotation became unmanageable. Otlet put his mind to new technologies that would overcome the limitations of paper-based records. In his 1934 book, Monde, he describes “…a machinery unaffected by distance which would combine at the same time radio, X-rays, cinema and microscopic photography… From afar anyone would be able to read any passage, that would be projected onto his individual screen, thus in his armchair, anyone would be able to contemplate the whole of creation or particular parts of it.”

Otlet even predicted social networks and the mobile web with remarkable accuracy, expecting users to “participate, applaud, give ovations and sing in the chorus” and “carry, in his or her pocket, a tiny little handset that will be tuned with the turn of a screw to the wavelength adopted by each emitting centre.”

Otlet died in 1944 with his life’s work in ruins, his collection destroyed to make way for an exhibition of Third Reich art. Following the war, he was almost forgotten as American pioneers such as Vannevar Bush, Douglas Engelbart and Ted Nelson came to the foreground. It wasn’t until W. Boyd Rayward published his biography in 1975 that the prescience of his work became apparent.

In 2012, Google acknowledged Paul Otlet and Henri La Fontaine as their spiritual forefathers. Vinton Cerf, vice-president of Google and inventor of the Internet, says it as it is, “The idea of the Internet was born in Belgium.”