The Space is a website for artists and audiences to create and explore new digital art. Supported by The BBC and The Arts Council, it had its launch at the Tate Modern this weekend. 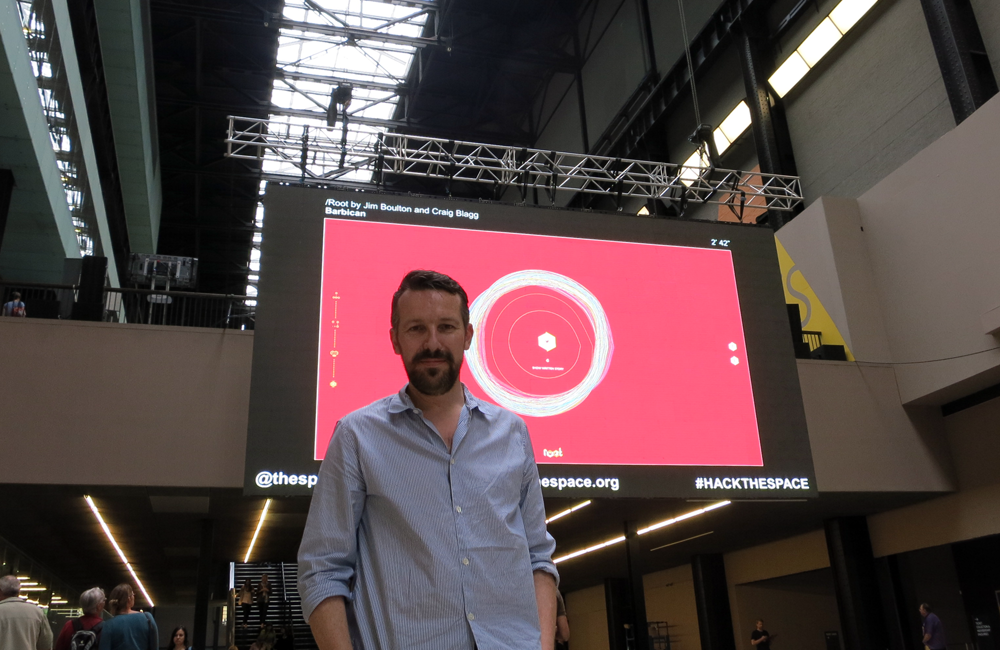 Jim Boulton and /Root at the Tate Modern

Craig Blagg and I are super proud to have created a piece of work for the launch of  The Space. It’s called /Root and it investigates the connections between digital projects – computer art, video games, CGI, digital music, websites and the odd CD-ROM. It’s inspired by John Conway’s Game of Life, although the end result is not a cellular automata.

Each of the approximately 100 digital projects – from classics like Space Invaders, Star Wars and the Dancing Baby, to more historical choices like Christopher Strachey’s Love Letters and John Whitney Snr’s Arabesque – is tagged with artist, designer and/or companies they were created by and the projects they were inspired by and went on to inspire. Research Institutions and Universities are tagged with students and faculty, companies are tagged with founders and employees.

The software then analyses the resulting network of nodes to produce family trees of influence. Choose a project and /Root will reveal its bloodline, from the first seed of an idea to its most recent manifestation. Parents and children then battle with each other, the most influential project in the lineage emerging as the winner. Free from human bias, the computer then narrates the story.

The hope is that by following common denominators, /root will identify forgotten pioneers and document their rightful place in digital history. Early signs are promising, /Root has informed me that John Chadwick worked at Autodesk and was involved in creating the Dancing Baby sample file for 3D Studio Max that went viral in the mid-90’s. He also worked at Xaos around the time they created the visual effects in The Lawnmower Man. I’ve contacted him for confirmation, I await his response.

Launching on The Space soon.