When Yugo Nakamura unveiled his MONO*crafts site at yugop.com in 1999, it made an entire industry stop and draw a breath. One of the first designers to embrace and exploit the potential of ActionScript, Nakamura’s interactive environments were fluid, calming, and natural. Previously a landscape architect, he quotes an old Japanese saying, “Rather than beautifying one’s own creation, make better the environment that surrounds it”, which I interpret as, better to make a beautiful user experience than a beautiful website. 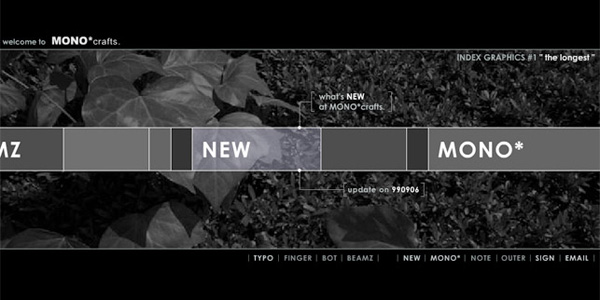 Citing MIT’s John Maeda as a major influence, Nakamura says “What I saw in Maeda’s work was very different. He was attempting to create something for the computer, not with the computer.”

John Maeda is one of the rare artists who can code. Self-taught from an early age, his first program being an accounting system for his family’s tofu business, he completed a bachelors and masters degree at MIT. He then went onto gain a PhD in Design at Tsukuba University in Japan. When he went back to MIT to head up the Media Lab, he wrote code that made art and taught his students to do the same. His reactive book experiments and his interactive calendars for Shiseido, now in the permanent collection of the San Francisco Museum of Modern Art, influenced anybody who was taking notice.

Like all the best interaction designers, Maeda and Nakamura are craftsmen. They see the computer as both a tool and a canvas. Their craft is only possible because they can both code and design. In the 90’s they were called Artist-Engineers, now we call them Creative Technologists. Then and now the genuine article is a rarity, despite what it might say on people’s business cards. Blurring the lines, the intersects as Maeda calls them, is where true innovation happens. Which is why smaller, independent businesses do more interesting things and nascent industries are more creative than mature ones. They don’t have the luxury of multidisciplinary teams, therefore they attract and produce multidisciplinary individuals. These people are so productive because, like craftsmen, they do not distinguish between the idea and the implementation. The process is iterative and unexpected results are welcomed, opening doors rather than closing them.

Nakamura said that with MONO*crafts he was aiming “to try and achieve something of the beauty that the craftsman produces” and in so doing produce something of lasting value. He tests this during the creative process by asking himself, “When I look at this five years later, will I still think of it as good?” Yes, Mr. Nakamura.

One Response to Digital craftspeople