A car isn’t a metaphor for a horse and carriage

Daniel Brown is an interaction designer and digital artist who first emerged in 1997 with his experimental website Noodlebox. Made with the CD-ROM authoring software Macromedia Director, the site reached beyond the metaphor of the page. Instead of using Shockwave to create an interactive piece within a page, Brown used it to create an entire website. In the process he created a more immersive, holistic experience.

Danny was trained well. His father, Paul Brown, was a pioneer in computer generated graphics and a friend of his mother’s, Roy Stringer, gave him his first job in 1996, at Liverpool John Moores University’s ‘Learning Methods Unit’. Led by Peter Fowler, the LMU was formed to explore how new forms of media could advance learning. One of its early successes was 1993’s award-winning CytoFocus, a piece of multimedia software that made the screening of cervical smears more efficient. Many commercial projects followed, resulting in Roy Stringer and Roger Harnden spinning off a sister company in 1997. The company was called Amaze and Danny soon became a key figure, helping them build a reputation around work that deviated from accepted metaphors.

Roy Stringer said in an interview with computeractive.co.uk in 1999, “Why we are stuck with a 2D symbolic plane with little icons in the corner just defeats me. It took us seven years to go from a command line… to the first graphical user interface. We’ve had graphical user interfaces for 15 years now and they still haven’t changed. A car isn’t a metaphor for a horse and carriage – it used to be, but it isn’t any more. A motor car isn’t a horse and carriage and so a computer isn’t an office desk.”

This was typical Amaze thinking, summed up by Roy Stringer’s Navihedron, a navigational tool that replaced the traditional hierarchical menu system with a 3d web-like diagram of interconnected nodes. The Navihedron allows the user to navigate according to their own logic, they are not forced to think alike or second-guess the site designer. The Navihedron came to define Amaze’s work in the late 90’s, notable projects including a multimedia version of ‘A Brief History of Time’ and MTV Mixer, which applied the same principles but using sounds rather than text. Sadly, this navigation system has not been widely adopted although something similar can be seen today on VisualThesaurus.com. 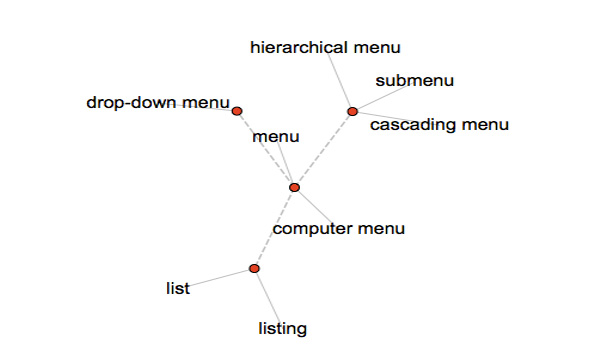 Brown was named Designer of the Year by the Design Museum in 2004, and Jonathan Ive said of him, “Daniel Brown’s work changes the way we look at and engage with digital imagery. It is technically innovative and emotionally engaging but also gives us an extraordinary amount of freedom in the way we experience it.”

Amaze are still going strong and Danny Brown continues his groundbreaking work at Nick Knight’s SHOWstudio but sadly Roy Stringer passed away in 2001. Noodlebox appears in the San Francisco Museum of Modern Art.